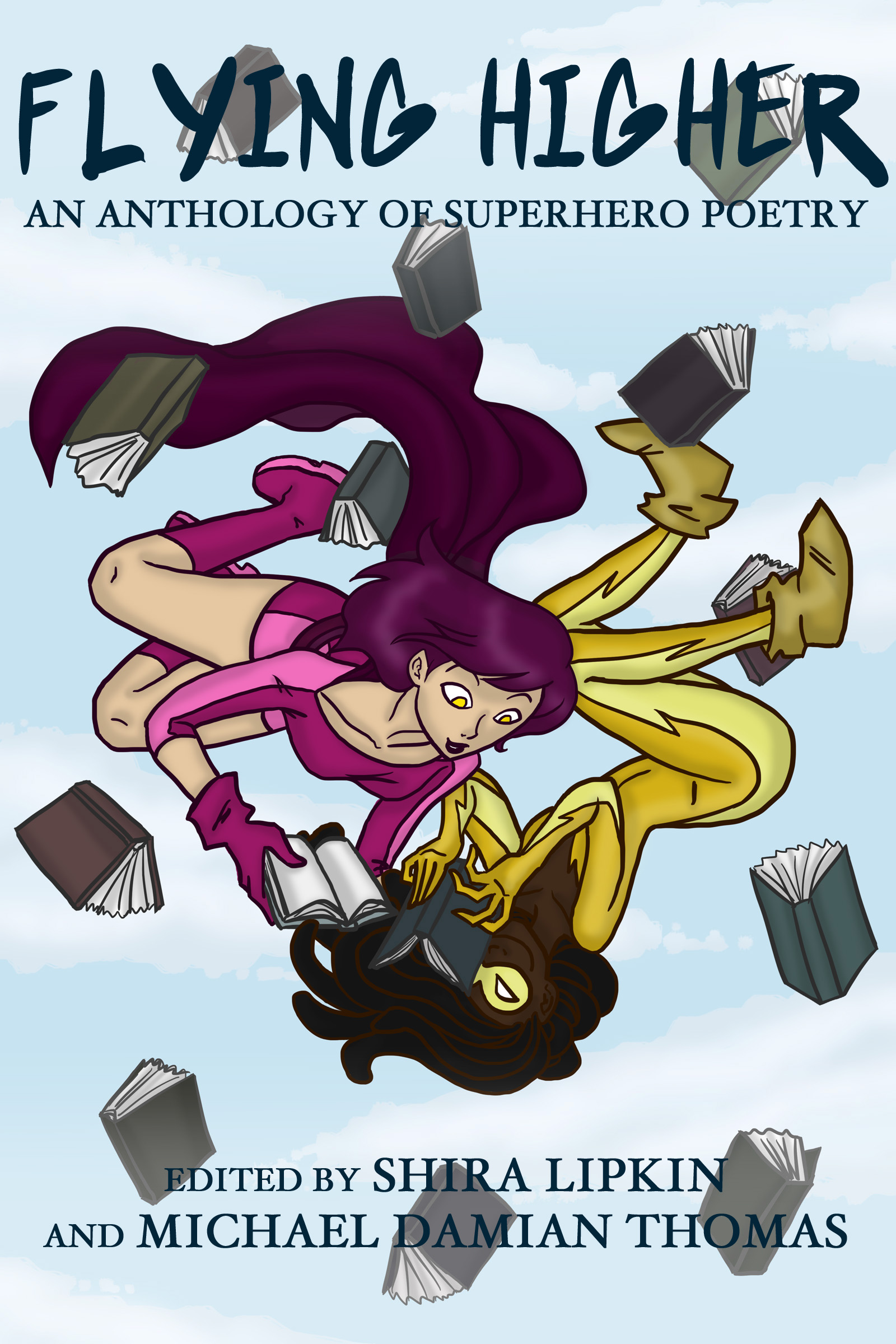 So while I was away, I co-edited an anthology! From the introduction:

One lunchtime at Wiscon (the major feminist SF/F convention held in Madison, WI), we were discussing poetry. Like you do. In particular, we were discussing topics that Michael didn’t think could make for good poetry under any circumstances. Specifically: Superheroes. Shira and Alex Bledsoe absently agreed… then started generating ideas. “I could do a good Superman poem, I think,” Alex said. Shira offered Wonder Woman – no, Amethyst – no, too many choices! – and said, “Actually, we should do an anthology.” Since Michael never says no to an anthology challenge, he agreed.

Said idea might have been utterly lost in the mad whirl of Wiscon activity had we not ended up at dinner that night at an Indian restaurant with a dozen wonderful writers, editors, and miscellaneous marvelous people who, when Shira insisted they all write superhero poetry on their placemats, actually did so. The seeds of this collection were collected that night.

And that might’ve been it – a small collection centered around one fun dinner – but we decided that everybody should have a chance to join the fun and did an open call for submissions. The anthology quickly expanded to what it is today – a collection of over 50 superhero poems from the ridiculous to the sublime, from award-winning poets and writers to total poetry novices and everyone in between. The unifying thread through this collection is a pure love for superheroes, in general and in particular, whether they’re the heroes we grew up loving, those we create ourselves, or just the structure and tropes of their worlds.

We just wanted everyone to have fun writing superhero poems. We hope you enjoy them.

I also have a poem in this! Michael and I both waited til the end to write our poems, to give everyone else first crack at characters. Mine happened very much at the last minute! I cycled through a bunch of possibilities, but when it came down to it, of course my poem was always going to be about Illyana Rasputin. “Limbo” is a look at a character who would never have been a superhero in any other universe, a trauma survivor who had no other labels available to her…

Flying Higher: An Anthology of Superhero Poetry is available FREE on Smashwords, and look at this table of contents!

* Michael and I were interviewed by the wonderful Julia Rios on the Outer Alliance Podcast.

* Scott Slemmons of “Hero Sandwich” says, in part: “Thumbs up. I love the complete unexpected surprise of this. I really never considered the idea of writing poetry â€” serious poetry â€” about superheroes. It still seems like an odd idea, and Iâ€™m not sure I could ever manage to do it myself. But Iâ€™m glad all these poets managed to wrap their brains around the concept so well. The variety of poems is very good, with serious works side by side with less serious ones, along with enthusiastic geekery, poets who are entirely ambivalent about superheroes, tributes to comics, films, and more than one real-life hero. Thereâ€™s something here for everyone.”

* The SFPA has two reviews here. Alex Plummer says “Flying Higher collects more than 50 poems by as many authors, all of which explore, ruminate on, or reimagine the complex, cape-shrouded, and ever-evolving world of the superhero. The collection forms a 91-page collage of crime fighters, cackling supervillains, and superhuman heroes; both those icons of the genre and those obscured by time. By utilizing a diverse set of poetic formsâ€”partnering villanelles with limericks (dirty and otherwise), giving every freeverse poem a rhyming sidekick, and seasoning it all with a haiku or two and at least one sonnetâ€”Flying Higher manages to be as varied and eclectic as the heroes that inspired it.

The collection is marked, above all, by a deep love and enthusiasm for the superhero genre, expressed in a variety of ways. Be it the retrospective sexual thrill inspired by genre mainstays, such as in Julia Riosâ€™s â€œBecoming Wonder Woman,â€ or Mary Robinette Kowalâ€™s â€œRobinâ€™s Legs,â€ tongue-in-cheek humor at the expense of overdramatic storytelling, as if found in S. Brackett Robinsonâ€™s â€œSwimming Lessons,â€ (where inflatable shoulder pads are all that saves one costumed hero from a ignoble death by drowning in a pond), or an exploration of the poignant moral conflict implicit in superhuman power, as laid out by Catt Kingsgrave in â€œThe Ballad of Captain Americaâ€™s Disapproving Face,â€ each poem, whether affirming or critiquing, wells from an abiding engagement with a landscape populated by superheroes, supervillains, and all the characters in-between.

Several of the poems consider the less heroic and more quotidian aspects of superhero life. Consider this passage from Wednesday Burns-Whitesâ€™s â€œKnitwear is Both Harder and Softer than Suits,â€ where She-Hulk laments her wardrobe difficulties:

They can’t kill me, but they killed my sweater.
My squishy, gunky, loaf-around sweater.
I loved that sweater. You have no idea.

This shit never happens to Stark, and he buys new suits all the time.

Other poems also engage with the off-duty aspects of superheroing, but take a darker bent, considering the strain such a lifestyle would leave on an individual: the reality not often depicted in the comics and movies. This excerpt from Shira Lipkinâ€™s â€œLimboâ€ shows a darker take on tragic origin stories:

I was not a child when I came home.

Not a child, not a hero,
but I wore your costume,
I hid my sword.

In Lipkinâ€™s poem, the hero seems aware of the context in which he lives, and theme that traces its thread throughout other parts of the collectionâ€”heroes and villains taking on an insquisitve or even antagonistic relationship with their creators or fans; a sort of metatextual commentary on the superhero comic genre that both delights and chills. Of particular note in that regard is Michael Damian Thomasâ€™s poem â€œHawkguy,â€ where the titular hero is overwhelmed by the number of alternate continuities and reboots he finds himself in, as well as Mike Allenâ€™s â€œDarksein the Diabolic Plots His Comeback from Beyond the Grave,â€ wherein a villain complains to his authors about his ignoble death.

Some of the poems of the collection assume a fairly detailed knowledge of the superhero genre on the part of the reader. Those who donâ€™t have that extensive knowledge may find a few of the more esoteric pieces lost on them. However, with such a variety of poems, many of them worthy of a read whether or not a reader has an interest in superheroes, a lack of extensive superhero knowledge shouldnâ€™t serve as a barrier.

For anyone looking for a collection of poetry that will at turns delight, shock, or pose serious questions, Flying Higher comes recommended. Itâ€™s available for free, so the only barrier to reading it is timeâ€”and this one is worth it. It transcends both Silver-Age comics nostalgia and Watchmen-esque gritty despair to arrive, through poetry, in a fractured but rich area where superheroes are increasingly human.”